As a first-grade teacher, I will confess that I'm very particular about how classroom jobs are done.  I have a super-organized classroom and very specific procedures, and ain't no one gonna mess that up if I have any say in the matter.  So it was with trepidation, but also hope, that I decided to give kids jobs this year.  You see, I have what I think is probably going to be the best class I'll ever have, so I am pulling out all the stops this year.  If any kids CAN be successful with complicated student jobs, it will be this class.

I was spurred to action by this great article about student jobs, by Jennifer Morris on Teaching Channel.  (If you don't know about Teaching Channel, it is a fantastic source of curricular and classroom-management ideas.)

The entire process of generating job titles and assigning jobs took about 90 minutes.  Yep, that's what I said.  We accomplished this in three different sittings, to give our brains and bodies a break from sitting and talking.

First, I asked students what "responsibility" means to them.  They suggested that responsibility is about doing their classwork, their homework, and any chores at home.

What, I asked, are kids responsible for at school?  They came up with a very long list on the smartboard, including some jobs that I had not thought of (like "keeping the playground clean").  I'm sorry that this photo is so small, but otherwise it runs into the lovely text on the right): 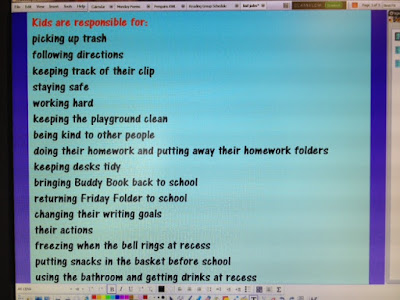 Those are a lot of responsibilities!  Every time they came back from recess, they wanted to add more items to the list.

What, I asked, did they think that I am responsible for?  They came up with a very long list, to which I added a few items that they would not be aware of (like, say, preparing all their activities for the day!).  I'll explain the asterisks in a moment: 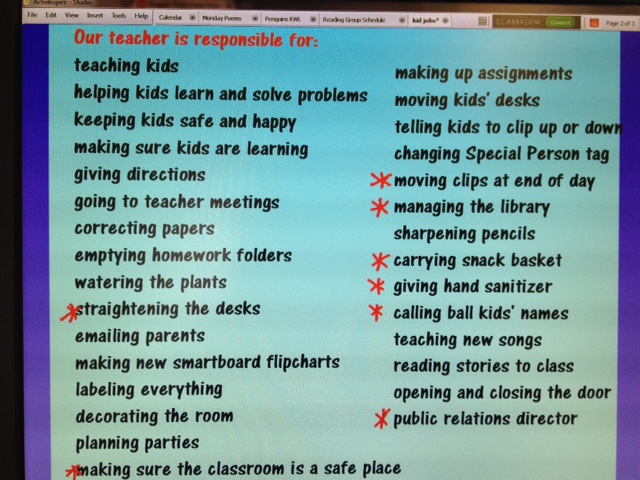 "Hmmm," I said.  "My teacher responsibilities sure are a long list.  Do you think that maybe you'd like to move some jobs off of my list and onto yours?"  Their eyes grew big.

"Do you think you might want to have jobs in the classroom?"

So I invited them to discuss which teacher jobs they thought could be handled by kids.  I placed an asterisk next to each of those jobs.  We examined each of their suggestions, and talked about whether that would be a good kid job.  Some of their ideas I nixed, like plant watering, because it only needs doing once a week.  A couple of others I declined because the jobs are more complicated than students know (like emptying homework folders when you have absent students) or involved breakable equipment (like my fantastically expensive electric pencil sharpener).  Other jobs that they suggested were ones I hadn't thought of, like "clip manager" (the person who announces kids who have clipped up at day's end, so those kids can earn a stamp toward a prize).

I had already generated a list of what I thought would be our final student jobs.  I showed it to students, then deleted some of my ideas and added some of theirs.  This was powerful because it showed my students that sometimes they have better ideas than I do.

Here was our final list.  Most of the jobs are self-explanatory, but I'll write more in a moment: 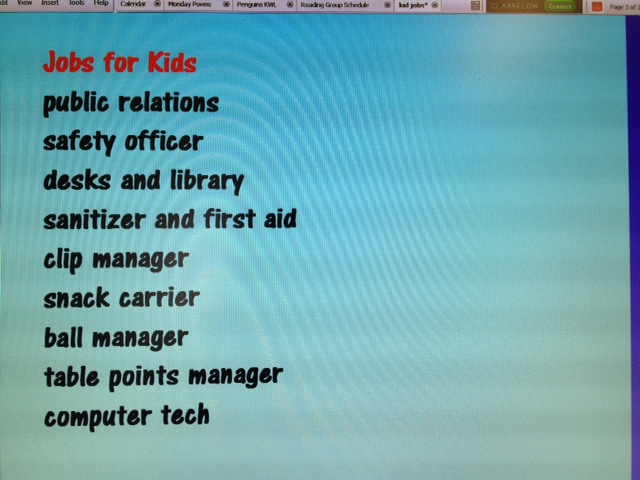 Public Relations Director - makes sure that we look like first graders (not kindergarteners) when we head out the door... walking quietly in line, and keeping our backpacks and lunchboxes tidy.

Sanitizer and First Aid - distributes Band-Aids and sanitizer as needed.

Desks and Library - straightening up desks and books

Clip Manager - at day's end, calls out the names of all students who have clipped up on the clip chart, so their stamp chart can be marked toward a future prize.

Table Points Manager - posts table points earned by each table group, by moving magnetized tally marks (aka popsicle sticks) on the whiteboard.  (All I have to do is announce the table points, and it magically happens!  So happy.)  This person also changes the date and the name of the Special Person (student of the day).

Ball Manager - calls out the names of students who get to take the classroom balls out to recess, and marks the names off on our alphabetized class list.

Snack Carrier - carries basket of student snacks out to recess and back, and distributes snack items

Computer Tech - determines when his or her reading group should have a ten-minute work session on the classroom computers.  This person calls their group to the computer table, sets them up on a predetermined website, and monitors their behavior.  Yeah, I know.  These are six- and seven-year olds. 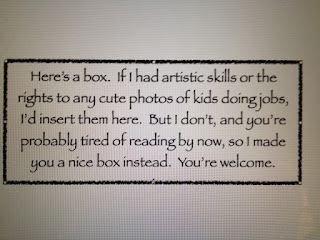 We ended up with nine jobs.  I have 20 students, so each job is shared by two kids, and computer tech is shared by four (since I have four reading groups).  My students have taken to their new jobs with aplomb!  Some students, obviously, need coaching to do their jobs well.  But we developed the jobs together, and they know that they all have a stake in accomplishing them well.
Posted by Unknown at 8:44 PM